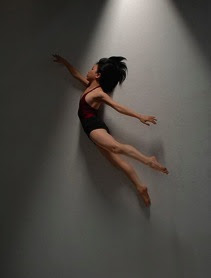 One of my favorite aspects of performing in the Cool New York Dance Festival is meeting other choreographers backstage. Personally, I love watching everyone warming up in costumes downstairs and imagining what transpires in their piece. Because we never do a full dress rehearsal, we can only catch glimpses of whoever is performing right before us. Hearing the music, occasional thuds or stomps, and the reaction of the audience only heightens the mystery.

I was delighted when one of our fellow choreographers from Program G, Jessica Chen, contacted Monkeyhouse through our Facebook fan page after the concert. It gave me an excuse to suss out more information about her piece, Training the Devil. Jessica was kind enough to indulge my barrage of questions through emails even though she was traveling in Taiwan.


karen Krolak: So was this your first time at the Cool New York Dance Festival?
Jessica Chen: Yes, this was the first time performing at Cool NY.

kK: Since choreographers have to be invited to perform in this festival, do you have any idea how Young Soon Kim, Artistic Director of White Wave, heard about your work?
JC:I got involved with White Wave through the DUMBO Dance Festival. I performed on Sept 26, but I also ushered the night before. Young Soon let me usher a few shows instead of paying the application fee. I was applying to a lot of festivals last year, so this was tremendously helpful and sweet of her. Then she called me and asked if I wanted to show work at Cool NY. How could I turn that down?!

kK: As you know, I wasn't able to see your piece since we were in the same concert. Can you describe it for me?
JC: Training the Devil is a very physical and emotional duet, danced with two blue gloves and one black tie. It is a glance into the merging of two lives and the journey after “Happily Ever After.” Two individuals, who bring out each other’s demons, discover a world of acceptance and reconciliation.

kK: Wow, I like that it is danced by two blue gloves and one black tie...
JC: The truth is I got those gloves from a previous show I did. They are designed by "Sex and the City" and "Ugly Betty" stylist, Patricia Field. I just really like them. So I brought them to rehearsal one day along with some other things. We both got very inspired by them so we kept going with it.

kK: Was that right at the first rehearsal?
JC: This was probably in the middle of our creative process. It fit the story line and the direction the piece was going, so we didn't question it.

kK: I am always fascinated by watching the evolution of ideas within a piece. I wonder how much the costumes alter your movements or added to their meaning.
JC: We actually collaborated with a video artist. She filmed our rehearsals and performances and made them into a music video. It's a different viewpoint of the piece, but it shows some of the movement. Check it out: http://www.youtube.com/user/jessicawchen

to be continued...
No comments:

Don't Miss Nora at the MFA

Ok, who wants to see a film about one of my favorite dancemakers, Nora Chipaumire, on Saturday morning, February 27th at 11AM at the Museum of Fine Arts Boston? I am serious. I would love to get a group together to go. Email me at monkeyhouselovesme@gmail.com if you are interested.

Nora by David Hinton and Alla Kovgan (US/Mozambique, 2008, 25 min) is a documentary that "is based on true stories of the dancer Nora Chipaumire, who was born in Zimbabwe in 1965. In the film, Nora returns to the landscape of her childhood and takes a journey through some vivid memories of her youth. Using performance and dance, she brings her history to life in a swiftly-moving poem of sound and image. Shot entirely on location in Southern Africa, “Nora” includes a multitude of local performers and dancers of all ages, from young schoolchildren to ancient grandmothers, and much of the music is specially composed by a legend of Zimbabwean music - Thomas Mapfumo. "

While I have not seen this film yet, I have heard that it is stunning. Nora taught at Summer Stages Dance in 2006 and I relished every moment of her class. Her choreography melds modern and African movement vocabularies together and her fluid power is simply mesmerising.

I am a also a fan of Alla Kovgan, one of KINODANCE's core artists. Alla is a Boston-based filmmaker who was born in Russia and her films have been presented at Sundance as well as festivals around the world. Some of you may even remember that she created some films in collaboration with Alissa Cardone for a concert I curated in the spring of 2000 at Green Street Studios in Cambridge.

Did you know that you can write in your favorite dance company (wink, wink) for the Boston Phoenix Best of Boston Reader's Poll?

P.S. What kind of friends would we be if we didn't also mention that our friends at Hub Comics, JP Licks and Actor's Shakespeare Project have been nominated under Comic Book Stores, Ice Cream and Theatre Company!

P.P.S You can vote once a day and you don't have to be from Boston so tell your friends!
No comments: 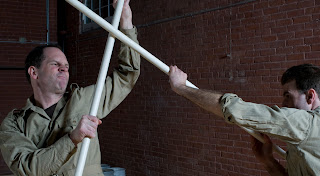 As you may remember, I had a rollicking time choreographing Coriolanus for Actors' Shakespeare Project last March. Well, thanks to Robert Walsh's vision of a 20 minute marathon of movement sequences, a spectacular crew of actors who were willing to embrace it and an explosive sonic environment created by Stephen Serwacki, the production was just nominated for an IRNE Award for choreography.

It is truly an honor to be included, especially for a non-musical production, given the impressive list of the other choreography nominees:

Anita Brockney and Donald Gregorio for THE PRODUCERS ( Playhouse),

Tommy Rapley for THE SPARROW (),

Congratulations to Actor's Shakespeare Project's Duchess of Malfi also, as it was also nominated for three other categories:

We will have to keep our fingers and toes crossed until April 19th when the winners are announced at the Boston Center for the Arts. 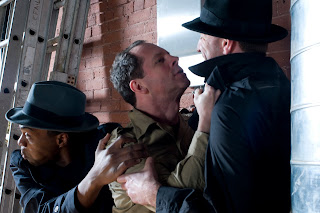 Getting to Know Michael Vernon

I have to admit, there are very few forces in the world that can make me voluntarily take ballet class. Michael Vernon is one of those forces. I met Michael at a Manhattan Dance Project workshop many years ago. Every year we would bring our students out to take class with Michael and the rest of the faculty. (psst! Keep an eye out for interviews with other MDP faculty too!) Sadly for me (although luckily for the students there) Michael became the Chair for the Department of Ballet at Indiana University right around the same time that I moved to New York, but whenever he's back in town I do my best to get over to Steps on Broadway (where he is on the faculty) to get in a few pliés.

Sarah Friswell, who has taken many of Michael's classes at Manhattan Dance Project over the years, chatted with Michael about his life as a choreographer, dancer and teacher. 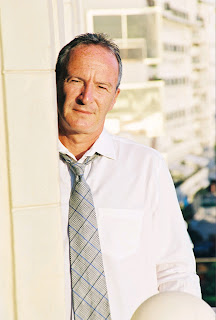 SF: Who are some of your favorite choreographers? MV: George Balanchine, Jerome Robbins, and Frederick Ashton.

SF: What made you realize you wanted to be a choreographer?
MV: It was just a natural transition about the same time as I started dancing. My first teacher was a choreographer with choreographic classes so I grew up with it.

SF: What has been your favorite piece that you’ve choreographed and why?
MV: A piece with music by Philip Glass called “Endless Night”. I loved the music and loved the quotation by William Blake where the piece got its name.

SF: Do you have any unique fixes for “choreographer’s block”/what do you do when you get stuck while choreographing?
MV: Just push through it. Either stop and think or go slowly. It’s like anything. You sometimes fall back on something that you know works and you can always change it later. Listen to the music. You can always come back. No steps are really set in stone as they say.

SF: Do you prefer to work with a small group or a large group?
MV: It depends. That’s hard to answer. It depends on the ballet. You can get a great effect with big groups. Small groups you can work with detail and get to know the dancer so much better.

SF: What is your favorite thing about being a choreographer?
MV: The form of expression. One is born into this sort of life and it’s satisfying. It’s the whole process of working with dancers, music, and a concept and putting it together on stage.

SF: You have an incredible background in ballet. Have you ever choreographed anything other than ballet?
MV: I studied Graham, Cunningham, tap, jazz, historical dancing, musical theater in the UK and was in a Broadway show. I use a balletic background, sometimes pure ballet and sometimes based on ballet.

SF: What has been the most memorable experience of your career so far?
MV: Studying with Margot Fonteyn and Nureyev in the same building with the Royal Ballet at its heyday. 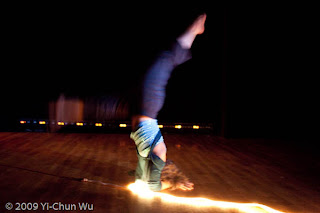 Yesterday after we finished teching our latest creation, anti-ossification, Nicole, Jason, and I grabbed a marvelous lunch at Baco Cafe . As we savored some heavenly tomato soup and shakshuka, we perused pictures from our 2009 Cool New York performances. 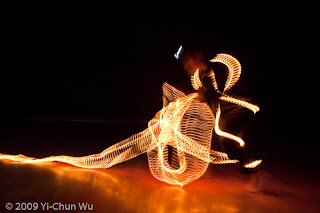 We were delighted by Yi-Chun Wu's images of Pochemuchka and Firk II and thought they might whet your appetite for this year's festival. Be forewarned that you will want to get there early to make sure you get a seat. 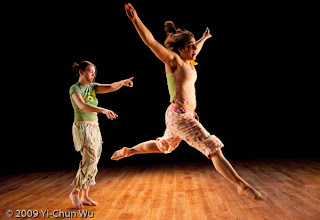 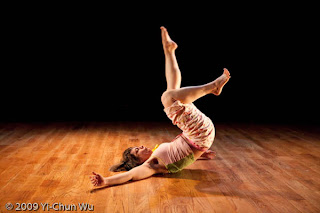 All performances are Free
(but they appreciate donations) and are
at WHITE WAVE John Ryan Theater,
located at 25 Jay Street, DUMBO, Brooklyn.
We hope to see you there!
No comments: