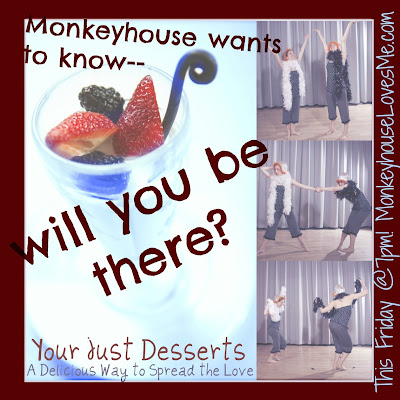 As if you needed more reasons to attend Your Just Desserts, let me give you one more...

Among other things Your Just Desserts will include an auction where you can win all sorts of amazing prizes, including a belt by Jon Wye, some goodies from JP Licks, some cupcakes or dance lessons.  What hasn't been mentioned is your very own palindrome!

Barry Duncan is a Master Palindromist, and has created a palindrome specifically for Monkeyhouse.  Barry has been working with Karen and Nikki all year long and the palindrome is part of Back Going No Going Back, an incredible collaboration of dance, spoken word, and projection art.

Barry will be at YJD tomorrow night, and he has even written a special palindrome about the event.  Better yet, you can WIN a palindrome by Barry!  Barry gets ideas from all kinds of things and has written lots of specialized and personalized palindromes in the past.  Don't miss the chance to meet such a unique guy!

See you tomorrow night!  You can also learn more about Barry Duncan by reading my interview series with him coming soon to C2C!
No comments: 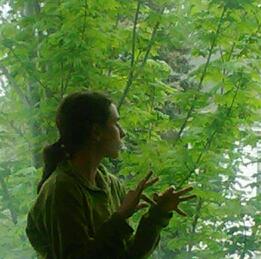 
Happy Birthday, Mariah!Mariah began working with Monkeyhouse last summer, creating a brand new piece for our upcoming Against The Odds Festival.  SInce then, we have had many fun musings with her new ideas and techniques and have nearly finished this new work!  How exciting to get to work with a different artist at our regular rehearsals.  In addition to working with Monkeyhouse Mariah has been plenty busy!  She spent a good deal of the summer traveling all around the country and is now teaching at Endicott with our own Nikki Sao Pedro-Welch.  Mariah is also preparing for her BCA Residency this fall where she will have a month long residency in the BCA studios before a performance of new work in November.  Congratulations Mariah!  We look forward to all of these upcoming performances as you continue to grow Quicksilver Dance!Monkeyhouse also wishes Happy September Birthdays to:Valerie Perrine, Beyonce Knowles, Mitzi Gaynor, Lola Falana, Sabrina Bryan, Frederick Ashton, Juliet Prowse, Lawrence Leritz, Deborah Kerr, Tony Waag, Anne Howarth, Tanya Rivard, Michelle Dorrance, Lewis Glass, Sarah Friswell, Olivia Scharff, Ashley Chandler, and Allie Fiske.
No comments:

Your Just Desserts is only FOUR days away and we want to make sure that you know all about it!  Buy your tickets today!

Everyone in the Boston area knows that J.P. Licks makes some amazing ice cream.  But did you also know that they support local art!?  I have been working for J.P. Licks for over six years now and they have always gone out of their way to support Monkeyhouse.  I will never be able to explain how grateful I am for everything they do.  This year they went a step above and became corporate sponsors for Against the Odds.  They will be a huge part of all the events this Spring, but first they'll be part of Your Just Desserts! 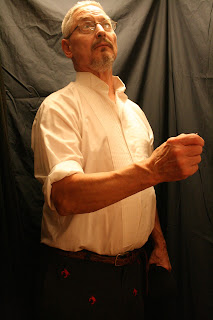 We are honored to welcome back Your Just Desserts Bake Off judge Don Hernstrom, head ice cream maker for JP Licks.  Want to be part of the Bake Off?  Just bring us your tasty creation (preferably cut into small portions!) and for just five dollars you'll be entered to have your treat tasted by our amazing judges!  Each judge will pick their favorite and award them a prize.  Don's favorite entry will win an ice cream party for five at JP Licks!  How cool is that!?

Head on over to JP Licks today and try the Chocolate Hazelnut, or maybe a maple spice latte and then buy your tickets to Your Just Desserts!
No comments:

Email ThisBlogThis!Share to TwitterShare to FacebookShare to Pinterest
Labels: Against the Odds, Donald Hernstrom, JP Licks, Your Just Desserts 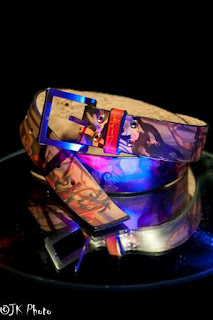 Your Just Desserts is just FIVE days away and everyone at Monkeyhouse is gearing up for an amazing night!  To make sure that you are as excited as we are, here are some of the adventures we have in store for you!  Purchase your tickets today!

A few years ago, when looking for a new roommate, Karen told me about the Facebook status of a belt maker from Washington, DC whose belts she had recently fallen in love with.  Jon Wye, a company that makes belts, t shirts, wallets and all sorts of serious awesomeness, was expanding to New York and their people needed a place to live.  It turns out that Jon and his business partner Jeff don't just make outstanding belts but they are pretty wonderful people too.  When we did Your Just Desserts the first time Jeff was kind enough to donate a belt and an apron to our auction.  The battle for the belt was intense and to this day people still talk about how sad they are that they didn't get it.  Well, have no fear, folks!  Jon has generously donated something to this year's auction too!

While the Jon Wye store in New York has closed, in addition to their DC adventures they can still be found every holiday season at Grand Central and even better than that, they can be found here in Boston at the SOWA Open Market!  Check out the booth today and then buy your tickets to Your Just Desserts!

When we planned the first Your Just Desserts in 2010 I thought, what could be more fun than a photo booth run by someone with an contagious energy and enthusiasm, rivaled only by his love for taking photos?  So, I called up my cousin Jonathan.  Probably my oldest friend, Jon and I went through childhood side by side.  We shared friends, clothes and interests and now that we had grown up I was thrilled to able to share in the artistic endeavors that make us both who we are.

His photo booth was a huge success and when Against the Odds rolled around we were happy to have Jon there snapping photos.  (Isn't that photo from Eva Dean Dance so sweet?)

More than a year later, Jon has made a lot of life changes, from his now one year old son and the start of his new photography business.  Whether they're family portraits, wedding candids or beautiful landscapes, Jon has a real knack for bringing out the personality of everything his lens touches.  When I asked him about the start of his new business, JK Photo, he said, "When you posted the photos I took of Monkeyhouse and I saw 'photos by Jonathan Keith' I realized that this was something I could do."

Well, everyone here at Monkeyhouse is 100% behind you, Jon.  And we are forever grateful for everything you do for Monkeyhouse!  You can catch many of Jon's photos at the JP Licks in Harvard Square, Davis Square and Legacy Place for the next few weeks and don't miss the Moooving for Meaning Photo Booth at Your Just Desserts on September 28th!
No comments:

Against the Odds Postponement

As you know, everyone at Monkeyhouse has been devastated by the recent Krolak family tragedy.  Karen, Jason and I would like to offer our sincerest gratitude for all the calls, messages, cards, hugs and amazing support shown by all of you through this terrible time.  Pat, Rita and Patrick were not just Karen (and Jason's) family, but they were a huge part of all of our lives as friends, role models, mentors, cheerleaders and so much more.  They were always there to show their support, offer advice or share a meal whether they had known you for years or you'd just met.  They were just that sort of people and they will be very greatly missed.

After much serious deliberation, it is with a heavy heart that we have decided to postpone this year's Against the Odd's festival.  Everyone within the organization has been thrilled and honored by the number of people who have come together to help us create this festival so far and it is our belief that this postponement will only strengthen the amazing work we've gathered this year.

We will still be holding a few of the events as scheduled, including Your Just Desserts on September 28th.  Please join us for this wonderful celebration!
No comments: