Getting to Know Josh Bergasse

As you know, this year we kicked off our C2C Intern program.  (You've been hearing from our Bloggers-In-Residence Ryan Casey and Sarah Friswell for a few months now!)  Here is the first interview done by Sarah Grace, a high school senior and student of mine in the Natick High School Drama program.  Sarah has a strong interest in dance and theatre so when I heard that Josh was once again doing fabulous things I asked if he could take time out of his busy schedule to chat with Sarah.  After you read about her conversation (and enjoy the day of the turkey!) head on over to Natick High School to see Sarah and the rest of the wonderful cast of Remember '11 as they take the stage to pay tribute to the NHS auditorium this weekend.  Enjoy!  -Nicole 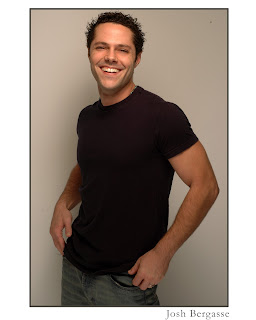 Josh Bergasse is an accomplished choreographer and dancer, having performed in several Broadway musicals and choreographing for shows like NBC’s new series "Smash" and FOX’s "So You Think You Can Dance." I had the opportunity interview Josh about his many experiences in the professional dance world.
SG: What sparked your interest in dance and theater?
JB: I grew up at my mother’s dance school outside of Detroit. My mom had a theater background so my studies involved a lot of theater. I put my first pair of tap shoes on when I was three years old.
SG: Do you have any favorite styles of dance, to perform, or to choreograph? Are there any particular dancers or choreographers that have inspired you?
JB: I love so many styles of dance. I don’t really have a favorite. I have some that I’m more proficient in or better trained in, such as jazz or theater. Some of my inspirations: Robbins, Fosse, Astaire, Gene Kelly, Cyd Charisse, Jack Cole, Balanchine, Hermes Pan, Michael Kidd.
SG: How did you first get into the professional dance world?
JB: My first professional job was a national tour of West Side Story. I played BabyJohn and was the Dance Captain.


SG: Since West Side Story, what was your favorite project?
JB: One of my favorite projects was being in the original cast of Hairspray on Broadway. I was a swing which is a great way to learn the inner workings of the show. It wasn’t bad to be in such a hit show either.


Currently, Josh is serving as the choreographer for NBC’s new television series, “Smash.” This fictional series revolves around the creation of a Broadway musical about Marilyn Monroe, and is set to premier in February, 2012!


SG: How did you get involved with Smash?
JB: I became involved with Smash through Michael Mayer, the director of the pilot and episodes 2 & 3, as well as one of the creative consultants for the series. Michael and I worked together years ago in the out of town tryout of Thoroughly Modern Millie (he directed, I was ensemble/dance captain).


SG: You've done a lot of work on stage, so what are some of the challenges of choreographing for a camera instead of an audience?
JB: Smash is true to the theater world it's set in, so there aren't many obstacles in choreographing for the camera, more like bonuses.  My assignment is to choreograph great numbers that stand on their own on stage, then we film them beautifully and make them multidimensional.  I think the biggest challenge would be working with the schedules of all the different departments, not to mention shooting an episode at the same time that you're prepping another episode.


SG: Do you have any other projects besides Smash going on right now? Where do you see yourself in a year, in ten years?
JB: I do have other projects that I’m prepping for in the future, but Smash is taking 99% of my time right now. In 10 years, I’d like to see myself relaxing on a beach in the Caribbean islands, or maybe Hawaii!


SG: Do you have any advice for aspiring dancers?
JB: My advice for dancers is to study all styles, learn to sing, find out what you’re good at and market it.