My introduction to the Jacob's Pillow's Choreographers' Lab 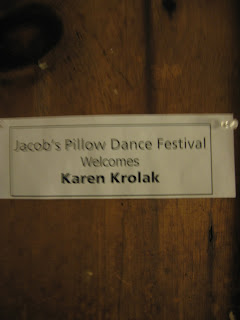 "Dance magically combines exercise, self-expression, fun group activity, intellectual stimulation, and spiritual uplift. All people should have access to these activities no matter what their age, ability, or body type."

from Teaching Dance To Senior Adults by Liz Lerman

For once in my life, I arrived early...several hours early. Given that I was weeks late for my birth and 30 minutes late for our wedding, I was delighted to be the first person to arrive for Jacob's Pillow's Choreographers' Lab.

It had been five years since I drove out to the Pillow to see Rennie Harris Puremovement ignite the stage of the Ted Shawn Theater. Pulling into the driveway, I was awed once again by the majesty of this woodland dance campus.

I hadn't heard who else was selected to participate in the Choreographers' Lab led by Celeste Miller and I was surprised as soon as I opened the welcome packet. The first name that my eye landed upon was Amanda Selwyn. She was in every choreography class that I took at Northwestern University. We drifted apart after my graduation 15 years ago. I didn't even realize that she had her own company when we bumped into each other on Bleecker St before one of Monkeyhouse's New York performances in 2002. How strange to share this process with someone who was in the room when I presented my first series of choreography phrases for Lynne Blom.

By the time that I had gotten checked in to my cabin and sorted out my belongings, lunch was ready. Walking into the Stone Dining Room, I was greeted by Norton Owen, the Pillow's Director of Preservation. He was kind enough to introduce me to a few other staff members and to reserve seat for me at his table. When he heard about Monkeyhouse's mission, he suggested that I drop by the archives that afternoon.

Heavens to Betsy, those archives are filled with photos, videos, costumes, and amazing ephemera. (They are open to the public and I highly reccomend a visit if you are ever out in Western MA.) Norton, who has been a part of Jacob's Pillow for 33 years, instinctively knew to point me to Liz Lerman's book and another about Anna Halprin. He related short anecdotes about both women's experiences at the Pillow as he searched the shelves and his admiration for them was palpable. How magnificent to have a living link to so many of the artists captured in these recordings and documents. I happily sank into a chair to read until it was time for orientation to begin.

[In my delusions, I had thought that I would have time to document every day in this sort of detail. After our tour of the grounds (complete with info on how to scare the bears who roam by the dumpsters!), it was obvious that the intensity of the schedule wouldn't really permit this. So, the next few entries will try to capture the spirit of the Lab and interviews with some of the other participants.]

With oodles of gratitude,
karen