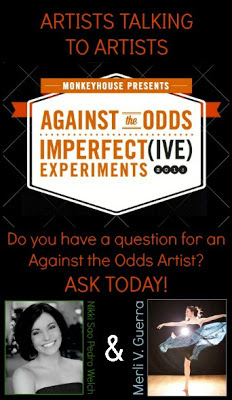 Welcome to the third installment of Artists Talking to Artists!  Once again Monkeyhouse's Nikki Sao Pedro Welch will be asking the questions, this time to Luminarium choreographer Merli Guerra.

NSPW:  I saw on your bio that you have training in classical Odissi technique. Can you explain this dance form?
MG:  Great question. Frequently, when I mention my Classical Indian Dance background, I hear "Ohhh, like Bhangra or Bollywood!" It's a perfectly reasonable connection, but Classical Indian Dance forms such as Odissi are actually rooted in traditional Indian temple dances, and take many years to master. I often ask people if they're familiar with images of the figures carved into the pillars and entrances of Hindu temples for reference. Many of the same positions and mudras I practice through Odissi can be seen in these very statues...it's beautiful to see in person! Here in Boston, Bharatanatyam seems to be a much more practiced style than Odissi, which I've studied and performed with Nataraj Dancers in Western Mass under Guru Ranjanaa Devi. Now, whether intentional or not, I find that most of my work has a much greater focus on gestures, facial expressions, and the hands. It's hard not to incorporate it into my modern dance, after breathing it all those years!

NSPW:  I also noticed that you toured India in 2012 with Deborah Abel Dance Company. Can you tell us about this experience?
MG:  Well, now, that's a question I've been grappling with ever since coming home! I anticipated this tour for over a year, and could not believe my luck in falling into it. I had toured India in 2007 to study Indian dance, and was dying to go back. Luckily for me, one of the leads dropped out of Deborah's production, prompting her to ask a friend of mine if he knew of a dancer in the area who "had an interest in Indian culture, was small and good at lifts, and preferably had long dark hair." Best typecasting that ever happened to me, and returning to India was as excellent as it was the first time.
I will say that performing in India (rather than other countries I've performed in) was quite the experience. From live wires dangling backstage to working with a crew that didn't speak English, it was a strange reality to feel both at home and foreign in these Western-style theaters. One minute we'd be given delicious meals in a luxury hotel, compliments of the Government; the next we'd be chatting with dusty children living on the streets. There was beauty and chaos in every moment, and each audience differed from one to the next. I don't believe I've ever performed for an audience as verbally enthusiastic as the one we received in Jaipur. Their constant chatting, shouting, and impromptu applauding distracted many members of our group (understandably!), but I have truly never before felt so much energy from a crowd--it fueled me throughout the night, and was (for me) the single best performance of the tour.
And, as always, I am dying to go back to India again.

NSPW:  I also saw on your bio that you are a filmmaker and use film with dance. Can you give us some information on any new projects that are in the works involving dance and film?
MG:  Yes! Perfect timing. For several years, I've been hoping to find a way to merge dance with textiles in a new and unique way. I recently received a grant from the Lowell Cultural Council to fund a collaboration between Luminarium Dance Company and the New England Quilt Museum (in Lowell) to combine two of the city's largest focuses: Quilting and Dance. It might sound like an odd coupling, but the results of this "Threading Motion Project" so far are beautiful. I've chosen six quilts from the museum's upcoming exhibit "Silk!" and am projecting them onto my dancers, while exploring the moods and movements each quilt evokes in our bodies. In two weeks I'll film these to create six Quilt Vignettes that will be played on loop as part of the museum's exhibit April 18 through July 7. Luminarium will also be presenting a 15-minute live piece in the museum, based on the concept of "threading motion," during the exhibit's opening and symposium (April 20 at 2pm & 3pm, and April 27 at 4pm).

NSPW:  Lastly, I noticed that you have a degree from Mount Holyoke in Dance and Studio Art. This is quite impressive! Can you tell us the most important part of your college experience/process that you still use in creating your work today?
MG:  While I was at Mount Holyoke, I found myself straddling the two seemingly separate worlds of Dance and Studio Art, and it wasn't until my Senior year that I finally found the bridge linking the two through my first film class. I got it into my head that I wanted to toy with one's perception of the "canvas," so rather than creating a film and simply showing it to the class on the screen, I decided to try my hand at creating a film, projecting it onto various surfaces, and creating a film out of that.
One thing led to another, and my Intro to Film "exercise" suddenly had me standing outside in a cold, concrete amphitheater, as images of me dancing through fields projected across the theater and my body. (My co-director of Luminarium, Kim Holman, actually helped me with this project. Why she didn't run after that crazy experimental night, I just don't know! Too late to turn back now, Kim.) My little film Synchronic soon went on to win Best of Mount Holyoke, Best Dance on Camera, and Best of Festival at the Five College Film Festival in 2009, and while winning these awards was (of course!) hugely affirming for my new artistic path, the creation of this single film served a far greater purpose.
Synchronic taught me to challenge what we use as canvas; it taught me how light interacts with the body as it dances across one's skin; it helped me recognize that I am fascinated with the concepts of space, time, and connecting with one's "past self," and it gave me a new medium through which to work. So while my choreography now varies from dance to film, and from video projection to nontraditional lighting, I do find that these same themes still play an active and exciting role in my work. In fact, the piece I'm showing in this year's Against the Odds Festival (Andromeda) touches on several of these themes as well: from "past-self" to the way my soloist interacts with the lights around her. If you haven't seen it yet, you'll understand me (and my work as an artist) much better once you have!


Do you have a question for Merli that Nikki didn't ask?  Well then, why don't you ask her here!?  All of the Against the Odds artists and everyone at Monkeyhouse wants to know what YOU are thinking, so let's keep the conversation going!